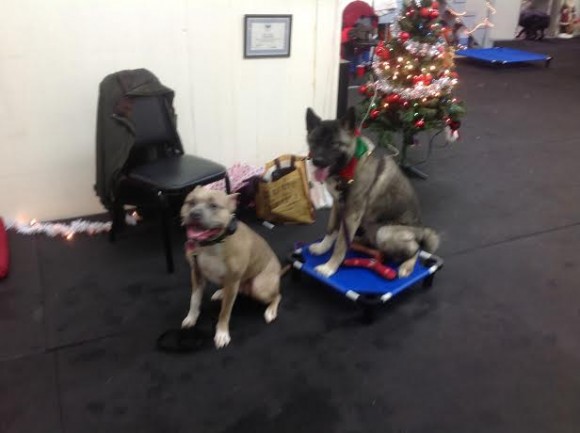 iCareK9 Dog of the Month: Boots

Boots is a beautiful Akita that lives in Silver Spring, Maryland with her owner Debra. Debra Edelin had a long time love for Akitas. Shortly after the death of her 11-year-old Akita, Debra knew that she would not be happy until she found another puppy. When a dear friend from North Carolina called and said a neighbor was looking for homes for Akita pups, Debra did not hesitate to tell him to pick out a puppy for her. Her friend went to meet the pups and Boots immediately made it clear that she wanted to be picked. Her friend thought that Boots reminded him of Debra’s previous Akita and decided Boots was the one. Debra chose her name based on her four little white paws that looked just like white boots on her feet.

Boots arrived home in Maryland on April 28, 2013. She settled in quickly, loved to cuddle and would lay in Debra’s lap every day to get groomed and have her teeth brushed. Debra started taking her to the pet store with her, where they would get stopped two to three times each trip for pictures. Everyone fell in love with Boots as soon as they met her.

As she started getting older her love for people would prove to be challenging. She would pull very hard on the leash and then lean on whoever she was visiting with so hard that people would almost fall over from Boots strength. As Debra says “She got so much attention as a pup I think she was beginning to think she was the ‘pack leader of people.’” This quickly became a problem.

Debra lives alone, but her daughter and grand-daughter live nearby. As Boots got bigger, when her family came to visit they could not get into the door because Boots would immediately pounce on them with excitement. They knew to ignore her until she calmed down, but this only caused Boots to lean on them until they couldn’t stand up.

With the sweet temperament of her dog and her love for people Debra knew that something would need to be done to curb her excitement around other people. She knew she needed professional help to get her to heel and walk, as well as keep her from being reactive around other dogs. Debra realized that Boots dominant behavior would only get worse as she got older unless she stepped in now.

After looking at several website recommendations from the AKC website, Debra decided to call iCareK9. She was impressed with the training videos that were featured on their website and even more impressed after she spoke to Annmarie Hursh about the training options. She made arrangements to send Boots to the two-week Board and Train program.

Morris Lindesey met with Debra at the end of the board and train program to show Debra what Boots had learned during her training. While doing a walk through Debra’s neighborhood Morris realized that Boots had a stubborn streak while on her home turf and would need a bit more guidance. It seems when Boots was a young pup Debra had gotten into a habit of picking her up when she stopped walking and carrying her back home. Boots was ready to go back to her established habits at home. Morris and Debra were able to work through this issue and now Boots walks beautifully wherever Debra takes her.

Debra also needed help getting Boots to get in her truck on her own. Debra would typically pick her up and put her in the truck by putting Boots front paws in the truck and then putting her arms under her back legs and lifting her up. One day Debra slipped and almost fell doing this and realized that she needed Morris’s help once again. After their training class, Morris conducted a ten-minute session on the “load” command with Boots. It took several tries during this ten-minute session, but the training methods finally worked.

Debra and Boots are doing much better with their walking and their loading these days. “I am so happy to be a student at iCareK9. I am a student just like Boots. Boots is called the neighborhood watch dog because she sits perched in the window watching all that is happening. She is constantly complimented wherever we are because she is so well mannered thanks to iCareK9!”