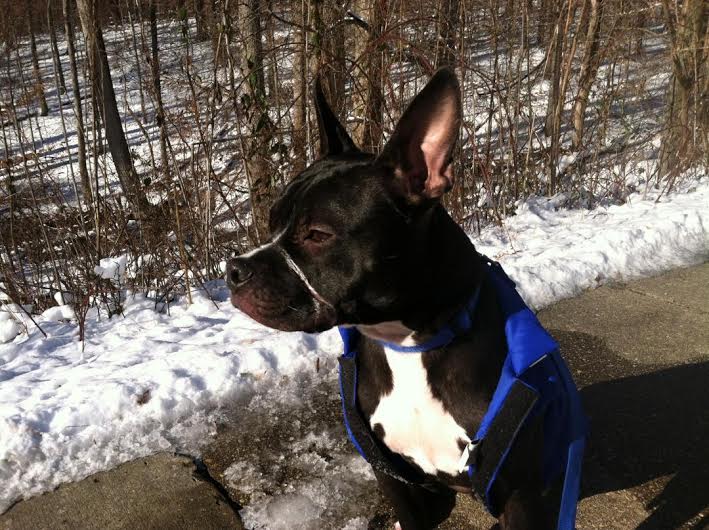 iCareK9 Dog of the Month: Baxter

Baxter is a 2-year old Staffordshire Bull Terrier/Boston Terrier mix that lives with his owner, Marisa in Rockville, MD. Last summer Baxter was found in the parking lot of a veterinarian’s office in Atlanta, GA. He had been badly abused. His mouth had been muzzled shut for an extended period of time with wire, causing severe scarring. He had been thrown out of a car and was half starved. Despite all of the abuse he suffered he was still a happy and friendly dog. After several surgeries he was sent to the Boston Terrier Rescue of South Carolina and placed with a foster family.

Marisa found out about Baxter and she fell in love immediately, put in an application to adopt him, and began arrangements to get Baxter to his new home.

“He’s so sweet,” says Marisa. “He loves people even though he was so badly abused. He loves other dogs and kids and has never once shown any signs of aggression. He’s just such a happy little thing!”

In November, one week after Baxter arrived at his new forever home Marisa callediCareK9 to set up an evaluation. Morris Lindesey worked with Baxter through private lessons first, primarily to curb his excitement and get him to focus. He jumped a lot and just tended to be very excitable. Says Marisa “Baxter’s very stubborn, but super smart. Morris has made a huge difference in his behavior. It’s nice to have a dog that listens!”

Marisa says that Baxter has progressed very well through his training at iCareK9 and she plans to continue indefinitely. “His life is so much better now and he deserves the best training for life!” He will be testing for his AKC Good Citizen test in May and will likely be training off leash in class even sooner.

Marisa refers to the still visible scars on his face as “war paint – because he’s such a strong survivor.” Baxter has white marks around his muzzle. The wire from his days of being abused was wrapped so tight that it damaged the hair follicles and has now grown back white. He has also lost hair underneath of his chin, as well as visible scars on his back right knee and both back feet.

Baxter’s story is a great reminder of a dogs capacity to love and a reminder to check out your local rescue organizations. There are many dogs out there just like Baxter that suffered senseless abuse and would love to find their forever home. If you need help with evaluating a potential pet, let the trainers at iCareK9 know. We would love to help!