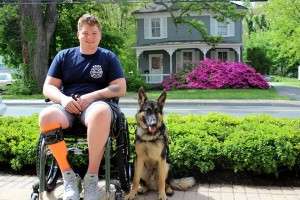 iCareK9 Dog of the Month: Ranger

Meet Ranger, an eight-month-old purebred German Shepherd. He joined his new family on Thanksgiving Day 2013. Coincidentally he achieved his first fifteen minutes of fame that same day, appearing on the front page of The Washington Post with his owner Franz. You see, Ranger is not just any ordinary dog. And Sgt. Franz Walkup, his owner, is not just any ordinary person.

Franz Walkup was born in Germany into a family of soldiers. One of nine children, his family moved to the United States in 2001. His older brother, Frank Walkup IV, passed away in 2007 in Iraq, killed by a roadside bomb. In the midst of his grief and anguish, Franz knew he wanted to serve and carry on his brother’s legacy. His two younger brothers were already in Reserve Officer Training Corps (ROTC) at the University of Tennessee with plans to be officers in the Army. Franz joined the Army in August 2009. A Fire Support Specialist with the 2/503rd Infantry, 173rd Airborne, he was deployed to Iraq in November 2010 for one year. Then deployed again in June 2012 to Afghanistan. This would be the deployment that ultimately changed his life. He had been in Afghanistan for three months when, during a mission, the Afghan National Army (ANA) turned on Franz’s platoon, killing two and wounding three. Franz was shot five times, four to the abdomen and one through the back. His left leg was broken, and his right hip destroyed from the four bullets hitting it. Still conscious, he packed his own wounds to slow down the bleeding and waited for his fellow soldiers to find him. He spent 12 days in Germany getting the necessary surgeries and healing enough that his body could withstand the flight to the United States. He was placed under a drug-induced coma for three to four weeks and awoke in Walter Reed National Military Medical Center on his wife, Shannon’s birthday. He awoke to find out that he had lost complete function of his right leg below the knee. Since the ambush Franz has had over 70 surgical procedures, spending a year as an inpatient at Walter Reed before being released.

Franz and Shannon started thinking about a service dog during Franz’s hospital stay. They knew they wanted one, but also knew that most service dogs were labradors or golden retrievers. Franz had his heart set on a German Shepherd. The process of finding a good German Shepherd breeder began and eventually led to their new pup, Ranger.

The Walkups had initially started Ranger in dog obedience training with a goal to have him trained to be a service dog, but were unhappy with the trainer they initially hired. He was extremely aggressive towards Ranger, and Franz and Shannon knew they needed someone that understood dogs better and knew how to train them without violence. Morris Lindesey and iCareK9 had been mentioned to Franz and Shannon many times during their outings at local dog parks and came highly recommended, whether dealing with aggressive dogs or just general obedience training. Franz found the iCareK9 website and called and spoke with AnneMarie Hursh. They felt very comfortable after speaking with AnneMarie and arranged to meet. After meeting they decided to do a 3-week Board and Train program while they travelled to Europe. They felt very comfortable leaving Ranger and knew he would be well cared for while they were gone.

Ranger now lives with Franz, Shannon and his “sister” Molly Sue, a white Maltipoo. He is in training to be Franz’s personal service dog. The staff at iCareK9 are assisting in the necessary training so that Ranger can pass the test and be certified once he turns two. He will train for another year and a half and then prepare for the Assistance Dogs International (ADI) test. Ranger will be trained to do tasks such as pulling Franz’s wheelchair, retrieving his medicine bag, picking up anything that Franz may drop and opening doors.

A New Passion is Born

Franz has one other passion. In addition to training Ranger, Franz spends much of his spare time handcycling for numerous organizations, one of which is Operation Enduring Warrior. Handcycles are like bicycles except powered by hands instead of feet. Most have two rear wheels and a single front wheel that can easily be steered. Handcycling enables athletes with disabilities to “ride a bike” using only the upper body for power.

Handcycling is one of the newest sports recognized in the Paralympic Games. Franz does fundraisers through his handcycling races to help raise money for other wounded veterans to have their homes adapted and made handicap accessible. After his brother Frank was killed in 2007, some of his brother’s friends got together and formed a race to honor him called The Mountain Man Memorial March (MMMM). The first MMMM was held in Gatlinburg, TN in April 2008 with 40 Cadets from the East Tennessee ROTC program participating. It was a 26.2 mile march and each Cadet carried a 35 pound rucksack. The event has grown considerably with over 600 participants and over 75 service members from all branches of the military being honored. Franz Walkup was the first handcycler to march this event.

These are just two of the many events that Franz participates in as a handcycler.  When location permits, he takes Ranger, who waits patiently for Franz to complete the course, always greeting him enthusiastically in the end.

Franz and Shannon are very grateful to have found iCareK9 and their team of caring, dedicated trainers for Ranger. If you’d like to follow Franz and his journey, you can join his group on Facebook “Staying Strong for Franz Walkup.”