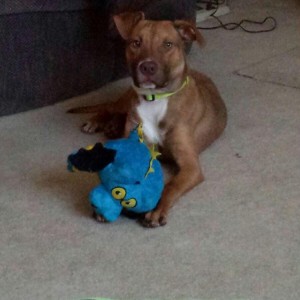 iCareK9 Dog of the Month: Beans

Tracy Howard met her beloved Beans for the first time in November 2013. She had just settled into her first home as a homeowner in Grasonville, Maryland (a small town on the Eastern Shore) and knew she wanted a puppy or young dog and wanted it to be a rescue. After pursuing different options, her sister found Beans, a 4-month old “pit bull mix” at Wicomico Humane Society in Salisbury, Maryland. Tracy met him two days after he arrived at the shelter and says “his red nose and green eyes got me at first sight and I didn’t want to leave for fear someone else would adopt him before we could pick him up (the following Saturday.)”

Tracy called the shelter daily that following week to check on Beans and make sure no one else had adopted him. She finally got to bring him home on November 9. She knew little about his history, other than he had been confiscated from his previous home due to abuse and neglect, according to Wicomico Humane Society.

The welcome home was not exactly as Tracy had hoped. Beans new “sister” Lola, a nine-year-old Shi Tzu was not happy with the new arrival. But worse yet, when Tracy’s cousin brought his children to meet Beans it was evident that there was a big problem. Beans did not like children at all. Tracy and her family hoped that it was just a case of letting Beans adjust to his new home and he would eventually be fine. Unfortunately his behavior towards children did not improve and Tracy also learned that other than his “sister”, Lola, and her sister’s two dogs, Beans did not like other dogs at all.

racy knew he needed training and it needed to happen fast. Tracy’s sister, Tami found iCareK9 online and set up an assessment with Annemarie Hursh and Morris Lindesey. They arrived for their first meeting with iCareK9 and were shocked and surprised at Beans behavior. Other dogs and their owners were there waiting for class to start. When Beans approached and saw the others he immediately began growling and barking aggressively. Morris Lindesey approached Tracy, Tami and Beans. “I will never forget,” said Tracy, “Morris coming out and asking ‘What do we have here?’ My sister responded with ‘a Pit mix’ but Morris immediately set us straight. Beans was in fact a Game Bred Pit Bull – bred for the sole purpose of fighting. My heart was broken and my sister immediately burst into tears. But fortunately for us, this was the day that Beans’ life and my own changed for the better!”

Tracy enrolled Beans in iCareK9’s Board and Train program for 2 weeks in March. The results were nothing short of remarkable. When she picked him up from the board and train program he was like a totally different dog. Morris informed Tracy that Beans was actually not aggressive, but reactive based on fear. He gave Tracy tools to use to help Beans become a better dog. He’s a year old now, he’s still not fond of kids but he doesn’t react nearly as strongly as he used to. She’s also discovered that he hates baseball caps. “He and I have come a long way since that first day at iCareK9, but still have work to do. If it weren’t for iCareK9 I don’t know if I would have been able to keep Beans. Now I look forward to a lifetime of love and kisses.”

Tracy and Beans still participate in obedience training classes with iCareK9 and have no plans to ever leave.