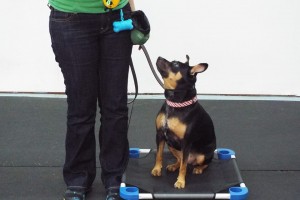 iCareK9 Dog of the Month: Mikayla

Mikayla is a mixed breed that lives with her family, Leah, Clayton and Chase, in Rockville, Maryland.

Leah has always been allergic to dogs, however her son had been begging for a dog for years. They finally decided that despite Leah’s allergies they would begin their search for a pet for the family. The requirements were that it had to be hypoallergenic, small to medium sized and a rescue dog.

They found Mikayla at the Montgomery County Humane Society website. Mikayla had been in and out of shelters, had one previous owner and several foster families. Other than that, the family did not know much about Mikayla’s background.

After they got her home they realized she was very nervous and dominant. She would not walk on a leash without pulling and struggling and could not be anywhere near other dogs without becoming very agitated. They realized that she was very reactive around other dogs. Within two weeks of being in her new home, she got into a fight with another dog while they were out walking. Leah had minor injuries from the other dogs leash wrapping around her leg. This was a very scary moment for Leah, realizing that as long as Mikayla behaved this way there was no way her son could walk her or be outside with her.

The search for  a good dog trainer began. Leah was very disappointed to find that each trainer she approached turned them away as soon as she mentioned that Mikayla was aggressive/reactive. They finally found a trainer that was willing to work with them and it was a horrible experience. They would not communicate training plans or techniques and required payment in full up-front. The method they ended up using was a prong collar which was not effective at all and seemed to make Mikayla’s issues worse.

After several months of this, the March family finally met Morris Lindesey. The first thing Leah remembers is Morris saying “Tension creates more tension.” Mikayla and her family had three private lessons at their home. Knowing that she was dog aggressive, Morris and Mikayla’s family would walk through the neighborhood looking for opportunities to really train Mikayla’s behavior when she saw other dogs. Within two lessons Leah noticed a huge difference in her behavior at home, but still had issues with Mikayla barking at other dogs. They started attending an Intermediate Class with iCareK9 – some days were good, others were not. At this point, Morris encouraged Mikayla’s family to try the remote collar to improve consistency and hopefully see an improvement in her behavior.

The March family started using the remote collar in July 2013. That coupled with consistency in their training and not letting Mikayla slide on small transgressions finally yielded the results they had been looking for.

As Leah says “From Spring 2013 to Fall 2013 we went from having a dog that couldn’t be in the same park as another dog, to her quietly being in an enclosed training space with 12 other dogs. Morris has given us our life back! We love to camp and hike and now we can take Mikayla with us. We are able to be on a walking trail and pass other dogs without a fight while Mikayla walks obediently beside us. Morris has taught us that the best thing we can provide for Mikayla is authority and protection.”